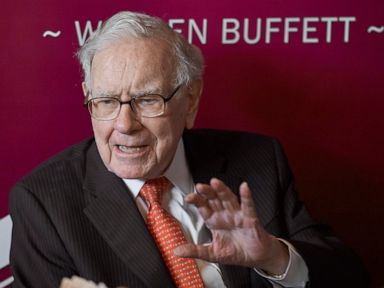 OMAHA, Neb. — Billionaire Warren Buffett’s successor bought nearly $70 million worth of stock in the conglomerate he is slated to one day lead.

Berkshire Hathaway Vice Chairman Greg Abel on Monday disclosed buying 168 Class A shares in the company in a filing with the Securities and Exchange Commission.

His holdings pale in comparison to Buffett’s Berkshire investment. The legendary investor, who has been Berkshire’s Chairman and CEO for decades, holds 229,016 A shares and 276 B shares to give him control of more than 30% of Berkshire’s voting stock. He has been gradually giving his shares away to five foundations, with most of his donations going to the Bill and Melinda Gates Foundation.

Abel already oversees all of Berkshire’s noninsurance businesses, and Buffett has said that he will one day take over as CEO as part of the company’s succession plan. But the 92-year-old Buffett says he has no plans to retire.

Investors will no doubt be encouraged to see Abel buying some Berkshire shares, but this summer he sold back to the company for $870 million his stake in Berkshire’s Iowa-based utility division that he used to lead. So even after these recent purchases of Berkshire stock, he has a significantly smaller investment in Berkshire that he used to.

Edward Jones analyst Jim Shanahan said he’s glad to see Abel investing in Berkshire shares because it “demonstrates his alignment with shareholders.” But he said it’s a relatively small investment given Abel’s wealth and compared to his previous stake in Berkshire Hathaway Energy.

Berkshire owns more than 90 different companies including BNSF railroad, Geico insurance, several major utilities and an assortment of manufacturing and retail companies that includes Dairy Queen, See’s Candy, Helzberg Diamonds and Precision Castparts. Besides the companies it owns outright, Berkshire also has a sizeable investment portfolio with major stakes in iconic companies such as Apple, Coca-Cola, Bank of America and American Express.