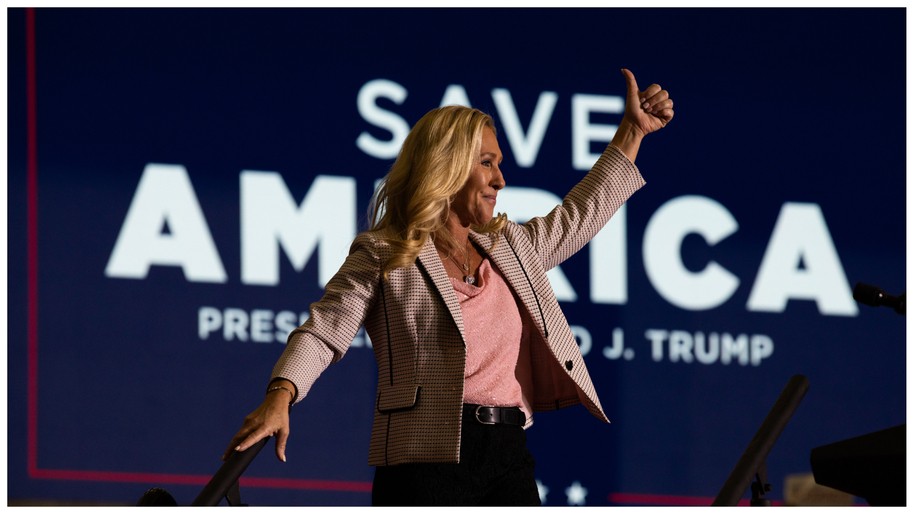 Ahmaud Arbery, a Black former high school football standout, was accused of breaking into a home under construction when a three-person mob convicted of hate crimes chased, trapped, and murdered him in a South Georgia community.

Another white man was accused of intentionally targeting a grocery store in a majority Black community then killing 10 people at that store in Buffalo, New York.

Greene didn’t mention any of them in her list of those slain because of their differences.

RELATED STORY: Fascista Marjorie Taylor Greene: If I was Speaker of the House I Would Reign with an Iron Fist

She listed only white Republican victims. One was 18-year-old Cayler Ellingson, who was hit and killed in North Dakota when another man accused of driving while intoxicated got into a political argument Ellingson. Next in Greene’s speech was 84-year-old “Right-to-Life” volunteer Joan Jacobson, who was shot while canvassing on September 20 in Michigan.

On the point that killing people for their beliefs is wrong, there is no debate. Using isolated incidents, however, to assert a wild accusation as fact should be beneath any sitting member of Congress.

Very little is beneath Greene. She went on to equate allegations of murder with President Joe Biden’s leadership. “Joe Biden has declared every freedom loving American an enemy of the state,” she said, “but under Republicans, we will take back our country from the communists who have stolen it and want us to disappear.”

Marjorie Taylor Greene: “I am not going to mince words with you all. Democrats want Republicans dead and they have already started the killings.”

This rhetoric is dangerous and unacceptable. pic.twitter.com/2UiKXsrlsJ

Greene nominated Kyle Rittenhouse for a Congressional Gold Medal after he shot and killed two men and wounded a third person, meeting protesters with a semi-automatic rifle in Kenosha, Wisconsin. Greene’s interpretation was that Rittenhouse “protected the community of Kenosha, Wisconsin, during a Black Lives Matter (BLM) riot on August 25, 2020.”

Those protesters were demanding justice after Rusten Sheskey, a white Kenosha cop, fired into the back of Jacob Blake, a Black security guard, seven times, paralyzing him.  When protesters took to the streets for Blake, they were met with threats from armed men including Rittenhouse, who flew from Antioch, Illinois to respond to an alleged militia’s call to protect local businesses, according to USA Today.

“We appreciate you guys. We really do,” an officer could be seen telling Rittenhouse and others at the protest. This was about 15 minutes before the gunfire, after which Rittenhouse followed with a publicity tour. Though “serenaded” with a Proud Boys anthem; though acquitted of guilt; though spotlighted by Greene and other Republicans—Rittenhouse is no hero. He is a living, breathing example of just how dangerous the Republican party is when following the leadership of those like Greene.