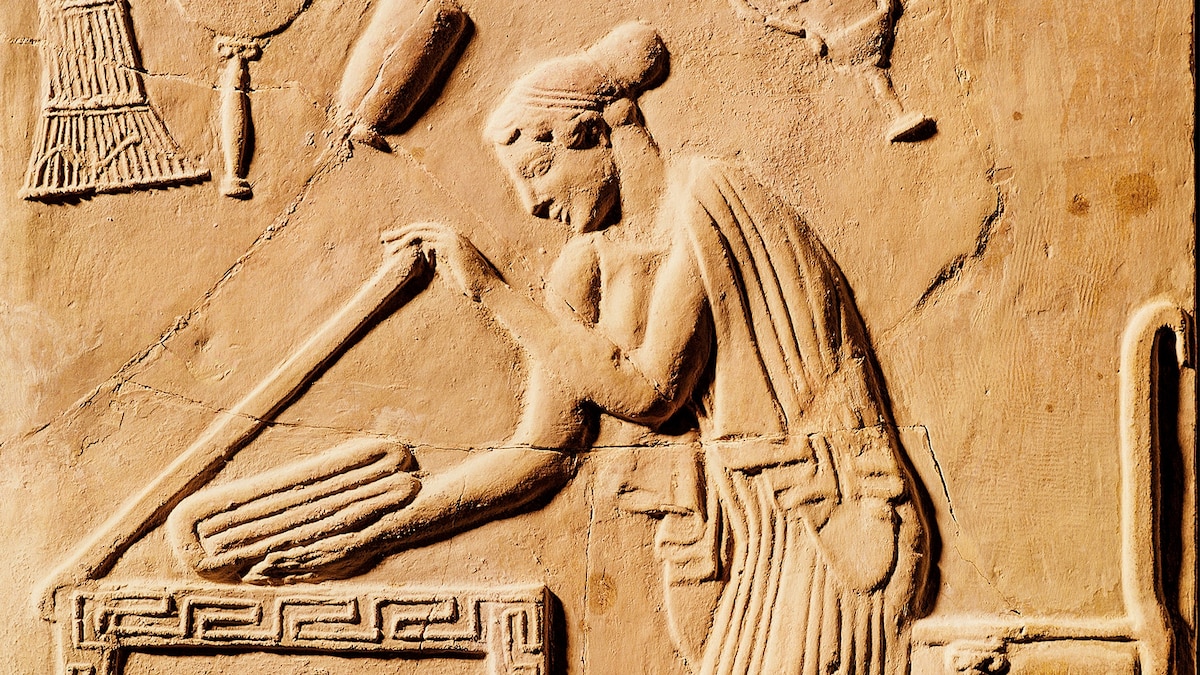 For many centuries, beliefs about the roles of girls and women in ancient Greece centered around how limited and hidden their lives were. Women were kept out of the public sphere, denied citizenship, and held no legal or political standing. Excluded from the polis, women were relegated to the oikos, or household, as wives, mothers, and daughters.

Much of this notion originated in written sources from classical Greece. Xenophon, Plato, and Thucydides all testified to the so-called inferiority of women to men. Writing in the fourth century B.C., Aristotle stated, in his Politics, that “again, as between the sexes, the male is by nature superior and the female inferior, the male ruler and the female subject.” Many of these texts originated in Athens, which had the most restrictive attitudes toward women. Other city-states, like Sparta, had greater freedoms for women, who were encouraged to exercise and train.

Looking beyond text sources, scholars find more complexity in the realm of religion. The Greek pantheon is full of powerful female deities, such as Athena, goddess of war and wisdom and patron of Athens; or Artemis, goddess of the hunt and wilderness. Archaeologists are finding that the lives of priestesses allowed women more freedom and respect than previously thought. Rather than a monolithic experience, the roles of women in ancient Greece were varied.

Life for most women of means centered generally around three stages: kore (young maiden), nymphe (a bride until the birth of her first child), and gyne (woman). Adult life typically began in the early to mid-teens, when she would marry and formally move from her father’s household to her husband’s. Most brides had a dowry that her husband did not have access to, but if the marriage failed, the money would revert to her father.

On the day of a wedding, female attendants would often prepare a purifying bath carrying water in a loutrophoros, an elongated vessel with two handles and a narrow neck typically decorated with marriage scenes. Archaeologists have uncovered loutrophoroi left as offerings in various temples, including in the Sanctuary of the Nymphe on the Acropolis in Athens.

Female attendants dressed and crowned brides in their father’s house, where the marriage ceremony would also take place. After the wedding, custody and protection of the bride was officially transferred from her father to the groom. A festive procession accompanied the newlyweds to their new home. The celebrations continued into the next day, when the bride received gifts from her family and friends.

Please be respectful of copyright. Unauthorized use is prohibited.

The longtime mistress of Athenian statesman Pericles is depicted in a 1794 oil painting by Marie-Geneviève Bouliard.

Limited sources can make it difficult to determine the truth about many ancient Greek women. One famous example is Aspasia of Miletus, the mistress of Athenian statesman Pericles and mother of his son (also called Pericles). Because she was not born in Athens, Aspasia was free from the conventions binding Athenian women. Renowned for her beauty and intelligence, she moved in the same circles as some of the most important men in fifth-century B.C. Athens, including Socrates and the sculptor Phidias. Some historians believe she ran a popular salon where Athens’s great thinkers would gather, but others characterize it as a brothel. None of Aspasia’s own writings have survived, erasing her voice from the record. It is an absence that leaves much to speculation about who she really was.

Within the home, women occupied the gynaeceum, a room exclusively for women. Representations of the gynaeceum appear on funerary stelae and ceramics. Women were in charge of the domestic sphere, and one of their main tasks was spinning and weaving. Many homes had their own loom. One of the most famous weavers from Greek mythology is Odysseus’ wife, Penelope, a paragon of motherhood and fidelity. While her husband was away for 20 years, warring at Troy then wandering afterward, Penelope was faced with greedy suitors seeking her hand for control of Ithaca. Crafting a ruse, Penelope spent her days weaving a shroud for her father-in-law, only to unravel it again each night in the hope that, while she delayed, her husband would return home.

Archaeologists have uncovered a large number of epinetra, thigh guards that were used by women while working with wool. Women would rest the semicylindrical piece of wood or ceramic on one leg to avoid staining their clothing with lanolin as they carded wool. Beautifully decorated epinetra were popular wedding gifts; many epinetra bore the head of Aphrodite, goddess of love and beauty.

The women of the house were also in charge of taking care of the children. The education of girls and young boys was the responsibility of the women, although the boys passed into the hands of a pedagogue after a certain age. Music, typically in the form of playing the lyre, was part of a girl’s education. Women also played a key role in funerary rituals for their families. They prepared the body by anointing and dressing it, and they would form part of the funeral procession.

(Did sons and daughters get the same education in ancient Greece?)

There were some women who received educations and made notable contributions in the arts and sciences. Around 350 B.C., Axiothea of Phlius studied philosophy under Plato (some sources say she disguised herself as a man to do so). In the sixth century B.C., the Delphic priestess Themistoclea (also known as Aristoclea) was a philosopher in her own right and a purported teacher of the famed philosopher and mathematician Pythagoras.

Women who participated in religious cults and sacred rites as priestesses enjoyed life outside the domestic sphere. Archaeologist Joan Breton Connelly’s work has found that in the Greek world “religious office presented the one arena in which Greek women assumed roles equal and comparable to those of men.”

Religious participation was open to young girls. The arrephoroi, for example, were young acolytes who had various ritual tasks, among them weaving the peplos (outer garment) that was dedicated each year to the goddess Athena. Girls between the age of five and adolescence could be selected to serve as “little bears” in rituals dedicated to the goddess Artemis in her sanctuary at Brauron (located about 24 miles southeast of Athens).

Serving as a priestess gave women very high status. In Athens, perhaps the most important religious role was being high priestess of the Athena Polias, who in her role could be granted rights and honors unavailable to most women: One second-century B.C. priestess of Athena was granted by the city of Delphi freedom from taxes, the right to own property, and many others. Names of priestesses were well known enough to be used by ancient historians to place key events in context. Historian Thucydides marks the beginnings of the Peloponnesian War with the tenure of Chrysis, a priestess of the goddess Hera at Argos around 423 B.C., alongside the names of contemporary Athenian and Spartan officials.

(Betrayal crushed Sparta’s last stand at the Battle of Thermopylae.)

Another highly significant female figure in Greek religion was the Pythia, Apollo’s high priestess at his temple in Delphi. Also known as the Oracle of Delphi, she held one of the most prestigious roles in ancient Greece. Men would come from all over the ancient world to consult with her, as they believed the god Apollo spoke through her mouth.

The women of Gortyn

Please be respectful of copyright. Unauthorized use is prohibited.

Minted between 350 and 220 B.C., a silver coin from the island of Crete bears the likeness of Hera, queen of the gods.

Sparta was not the only city where women enjoyed more freedoms than the women in Athens. According to its fifth-century B.C. Great Code, Gortyn, a city on the island of Crete, allowed women to inherit and manage property, recognizing the value of women’s work as a generator and protector of wealth. In addition to managing their own assets, women could control the possessions of their children if the children’s male guardian was unfit. Evidence of legislation governing marriage, divorce, and the possession of property among Gortyn’s enslaved population has been preserved, providing insight into how the lives of women differed depending on their social class.

Priestesses played important parts in sacred festivals, some of which were predominantly, even exclusively, female. Many of these were associated with the harvest. At the Thesmophoria festival, women gathered to worship Demeter, goddess of agriculture, and her daughter, Persephone. During the Dionysiac festival of the Lenaea, women joined orgiastic rituals as maenads (mad ones), to celebrate Dionysus, god of wine.

Classical scholars continue to find more and more complexities in the formerly hidden lives of ancient Greek women. What is being revealed is a more complete picture of the culture, one where the female experience was richer and more varied than previously thought.

(This 3,500-year-old tomb held the treasures of Greece’s ‘Griffin Warrior’.)

The author of 5 books, 3 of which are New York Times bestsellers. I’ve been published in more than 100 newspapers and magazines and am a frequent commentator on NPR.